You Can Find Anything at Costco (story relayed with permission) 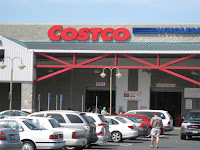 At a recent gathering of women, the topic of relationships came up. A woman told about the ending of her long term relationship and how she didn’t know if she would ever get through the emotional roller coaster that followed. She lived in dread of bumping into her ex in the community, noted with despair that she felt almost addicted to this man who did her wrong. Would she fall back into the pattern that trapped her originally? Would she fall apart and lose her resolve to move on? If you’ve been in a relationship that ended before you were ready, you might be able to relate to this story.

For five years she suffered anxiety. Then one afternoon, shopping at Costco, she felt a tap on her shoulder. She turned around, and there he was—the object of her most pervasive anxiety. Did she throw up? Did she run screaming from the store? Did she aim a well-placed kick? What did she feel? Nothing. Absolutely NOTHING. It was at that very moment she realized she had found closure.

From across the room another woman commented, “Wow, you can find ANYthing at Costco!”
Posted by Jo at 9:10 AM