Some Thoughts on Bicycling 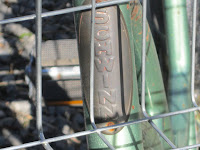 It wasn’t a lie, exactly. When my physician asked me how much exercise I get a day, I said I usually bicycle or walk daily, for twenty minutes to half an hour. For a “senior” that doesn’t sound so bad. Then again, my friends are out on the tennis courts, or whacking balls on the golf course, or long-distance bike riding, or hiking up mountains . . .

So let me explain myself. I do actually prefer biking over driving when I can. No gas to buy, no pesky parking places to look for, and I can navigate through traffic quickly on bike. It takes longer to get somewhere, yes—actually, it takes MUCH longer the way I do it.

I bike much like I walk. And I meander, or lollygag, more than walk. So in twenty minutes or half an hour, though it seems like a good commitment to physical exercise, I don’t really get all that far, and I doubt if my heart rate would reflect “aerobic.” BUT . . .

Let me tell you about the sensual joys of moving slowly through the world—particularly at night when the drier, warmer smells of day are done, and evening moisture awakens subtle aromas. As much as I dread winter, when it’s dark before I even leave work, I’ve found that I treasure those slow night rides home on my bike.

In the evening, the settling-in smells carry on the moist night air—a roast in someone’s oven activates my salivary glands; the green smell of wood shavings from a neighbor’s remodel project reminds me of the houses my grandpa used to build when I was a child; the boughs of a cedar tree I pass under are reminiscent of my grandmothers hope chest at the end of her bed; the smell of burning logs in a fireplace is a quintessential expression of hearth and home coziness. The earth takes on a mushroomy aroma at night, and the scent of fog as it moves inland reminds me of cooked rice.

Also, in the evening you can see cars coming a whole lot easier. And the stars—oh my; on bike it’s like riding under a sparkling canopy. One evening I was so mesmerized by all the twinkling, I risked a prolonged look at the night sky and whammed right into a dark blue recycling bin left sitting a couple feet from the curb. Lesson learned—now I stop to star gaze.

The scents of day have their own imprint as I lazily ride the distance between work and home. In the morning, I catch a whiff of bacon as I pass by a neighbor’s home. There’s a collective smell of “traffic” during the commute hours. Dryer sheets scent the air from someone doing an early load of laundry. Narcissus, reminiscent of kindergarten paste, wafts up from the borders of the sidewalk.

Then there’s the sheer joy of being on my bike, a fifty-eight year old Schwinn that I got when I was seven. At that time, the bicycle weighed more than I did. Somehow, it survived decades of cousins learning to ride, and returned to me via my parent’s shed when I was an adult.

Originally mint green and lavender, it has undergone a couple of repaints—including Pepto Bismo-pink—and is currently a lovely sea-green. There’s a synergy that happens when I climb onto the seat now (how did I ever reach the pedals when my legs were child-length?). I become a slightly zany old woman chuckling with delight at having her old friend back in her life, and at the same time, I am that innocent child given her first taste of freedom that only a bicycle can provide. Ah, the memories we’ve shared.

There’s something good to be said about relics—the human and the mechanical kind. We’re living pieces of history moving through the world. I’ve been stopped many times at the grocery, or the laundromat, or just on a street corner by adults who with a smile of reminiscence say, “I used to have one of those when I was a kid,” or teenagers who muse, “Wow, they don’t make those anymore, do they?”

No gears, no fancy hand brakes. Just life at a slower, easier pace, the way it was meant to be lived.
Posted by Jo at 2:27 PM 2 comments: